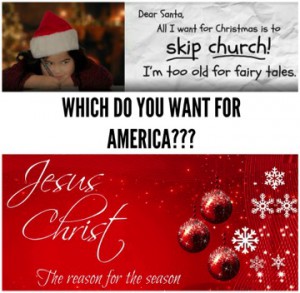 London Telegraph – The giant advertising hoardings in the Tennessee cities of Memphis, Nashville, St. Louis and Fort Smith, Arkansas show a mischievous-looking young girl writing her letter to Father Christmas: “Dear Santa, All I want for Christmas is to skip church! I’m too old for fairy tales,” she writes.

The advertising campaign by the American Atheists group will run until Christmas Eve and is the first time the group has aimed its anti-God adverts directly at residential religious areas, having previously targeted urban audiences in big venues such as Times Square in New York.

“Today’s adults have no obligation to pretend to believe the lies their parents believed. It’s OK to admit that your parents were wrong about God, and it’s definitely OK to tell your children the truth,” said David Silverman, the group’s president, as he launched the campaign.

Lea Carawan, Executive Director of the Congressional Prayer Caucus Foundation says “This is yet another clear example of atheist groups trying to change the foundation of America. Our country was founded on Christianity, and Christmas is about Christ. These are historical facts not in dispute. Just because a small minority puts up snarky billboards doesn’t mean that God’s love will not be felt by families all across this great nation at Christmas. Churches will be full and God’s name will be lifted on high. However, this is a great reminder for Christian everywhere to stand up, find their voice, and make sure to tell everyone they meet ‘Merry Christmas’ this holiday season.”

Lea Carawan is available for your show this week. To book an interview with Lea please contact CJ Wheeler at cj@bookitcj.com or 858-472-4285.