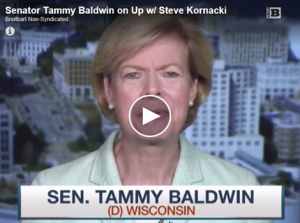 Wisconsin Senator Tammy Baldwin went on national TV and told Americans of Faith that their religious freedoms exist in church and other religious institutions, but not really outside of those walls.  Watch Video Here

“Certainly the First Amendment says that in institutions of faith that there is absolute power to, you know, to observe deeply held religious beliefs. But I don’t think it extends far beyond that. . . . [I]n this context, they’re talking about expanding this far beyond our churches and synagogues to businesses and individuals across this country. I think there are clear limits that have been set in other contexts and we ought to abide by those in this new context across America.” – Senator Tammy Baldwin

Sen. Baldwin clearly wants people of faith and business owners of faith to be kept inside their churches, behind close doors, and finds no problem in redefining and restricting the religious freedom of the First Amendment Rights of the 70 percent plus Americans identify as Christian.

Lea Carawan, Executive Director of the Congressional Prayer Caucus Foundation says ” This is a very real threat as we are witnessing. Judges and others are undermining our Constitution; to make our First Freedom a secondary right. Americans don’t have the luxury of taking religious liberty for granted by allowing Freedom of Religion to be redefined and restricted to only expressing our faith in our hearts, homes, or houses of worship.

The Declaration of Independence clearly identifies that in America we understand our rights come from God and not man; if we can be convinced otherwise, our rights can be taken away. ”

The vision of the Congressional Prayer Caucus Foundation is to protect religious freedom, preserve America’s Judeo-Christian heritage and promote prayer. Lea Carawan is available for your show to talk about this important topic. To schedule an interview with Lea please contact CJ Wheeler | 858-472-4285 | cjradionews@gmail.com .