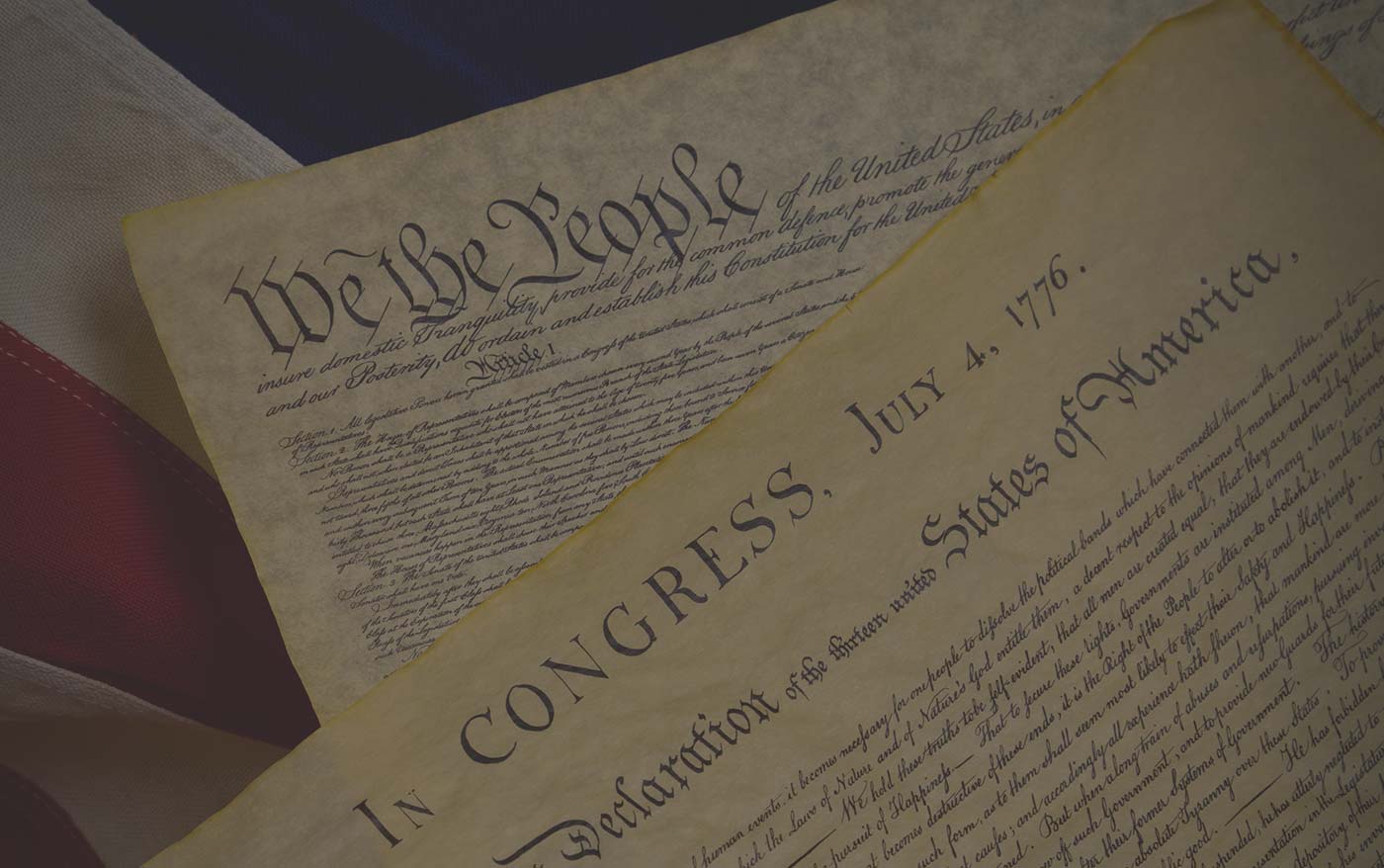 In God We Trust National Motto

“In God We Trust” was adopted as the official motto of the United States in 1956. The phrase was designed as an alternative to E pluribus unum, which was the unofficial motto first used in 1782 when the Great Seal of the United States was also created. The phrase may have originated from the words of the “The Star-Spangled Banner” written during the War of 1812. The fourth stanza includes the phrase, “And this be our motto: ‘In God is our Trust.’” The motto first appeared on U.S. coins in 1864 and on paper currency in 1957 (a one-dollar silver certificate). The law making In God We Trust the national motto was passed through a joint resolution by the 84th Congress (P.L. 84-851) and signed by President Dwight Eisenhower on July 30, 1956.

Chief Historian at Antietam National Battlefield, Ted Alexander, maintains the motto was first used by the 125th Pennsylvania Infantry as a battle cry on September 17, 1862. From the crucible of the Civil War, the Reverend M. R. Watkinson, in a letter dated November 13, 1861, petitioned the Treasury Department to add a statement recognizing, “Almighty God in some form in our coins,” perhaps as a declaration that God was on the Union side. Treasury Secretary, Salmon P. Chase, acted on Watkinson’s proposal and directed the Director of the Philadelphia Mint, James Pollock, to begin work on potential designs that included the phrase. Due to an Act of Congress dated January 18, 1837, mottoes and devices that are placed on U.S. coins, had to first be prescribed by enacting additional legislation. Such legislation was introduced and passed on April 22, 1864, allowing the Secretary of the Treasury to authorize the inclusion of the phrase on one-cent and two-cent coins.

The use of “In God We Trust” has not been continuous since its inception. In 2006, on the 50th anniversary of its adoption, the Senate reaffirmed the phrase as the official national motto and in 2011, the House of Representatives passed an additional reaffirming resolution in a 396-9 vote. It is also the motto for the State of Florida.

Evidence of Government Support for ‘In God We Trust’

• The first paper money with the phrase ‘In God We Trust’ was printed in 1957.

• The National Motto, ‘In God We Trust,’ was created by Act of Congress in 1956. The bill was signed into law on July 30th 1956 by President Eisenhower.

• The National Motto was affirmed in 2002, and then in 2011 the U.S. House of Representatives overwhelmingly (396 to 9) passed a resolution reaffirming the National Motto and encouraging the public display of this motto in all public buildings and public schools.

• Numerous state legislatures have passed similar laws and are encouraging schools and state offices to place a poster with the National Motto in every classroom.

Display of ‘In God We Trust’ in Government Buildings

• Nearly 100 Members of Congress have the National Motto prominently displayed in their offices.

• To date, over 600 cities and counties nationwide display the National Motto in their offices, chambers, official seals, and even on the outside of police and sheriff’s cruisers.

• The National Motto is displayed in and on countless government buildings, businesses, schools, etc.

Legal Precedent for ‘In God We Trust’

The Motto has been found Constitutional in critical court cases:

• In 1977, Madalyn Murray O’Hair, the founder of American Atheists, brought suit claiming that the National Motto, “In God We Trust,” and the usage of the National Motto on U.S. coins and currency violated the First Amendment to the Constitution. The federal district court dismissed Ms. O’Hair’s complaint, and the appellate court affirmed. O’Hair v. Blumenthal, 462 F. Supp. 19 (W.D. Tex. 1978), affd. 588 F. 2d 1144 (5th Cir. 1979), cert. denied, 442 U.S. 930 (1979). In dismissing the complaint, the trial court quoted approvingly from a previous circuit court decision (Aronow v. United States, 432 F.2d 242, 243 (9th Cir. 1970)) that held that the “national motto and the slogan on coinage and currency ‘In God We Trust’ has nothing whatsoever to do with the establishment of religion. Its use is of a patriotic or ceremonial character and bears no true resemblance to a governmental sponsorship of a religious exercise.” 462 F. Supp. at 19-20.
The court in Ó’Hair also relied upon the U.S. Supreme Court case of School District of Abington Township v. Schempp, 374 U.S. 203 (1963), which considered compulsory reading of the Bible in public schools (something that the Court prohibited). In this opinion involving public schools, Justice Brennan, in a concurring opinion, stated that the National Motto, “In God We Trust,” was “interwoven . . . so deeply into the fabric of our civil polity that its present use may well not present that type of involvement which the First Amendment prohibits.” Id. at 303.

• The U.S. Court of Appeals for the Ninth Circuit, not known for its conservative leanings, in Aronow v. United States, held that the motto is “patriotic or ceremonial [in] character” and “has nothing whatsoever to do with the establishment of religion.” And, 40 years later, in Newdow v. Lefevre, the Ninth Circuit re-affirmed that holding. The Tenth Circuit reached the same result in Gaylor v. United States, 74 F.3d 214 (10th Cir. 1992), cert. den., 517 U.S. 1211 (1996).

Take Action
Join the In God We Trust. Put It Up! initiative

Join millions of Americans who are putting God back up in America….