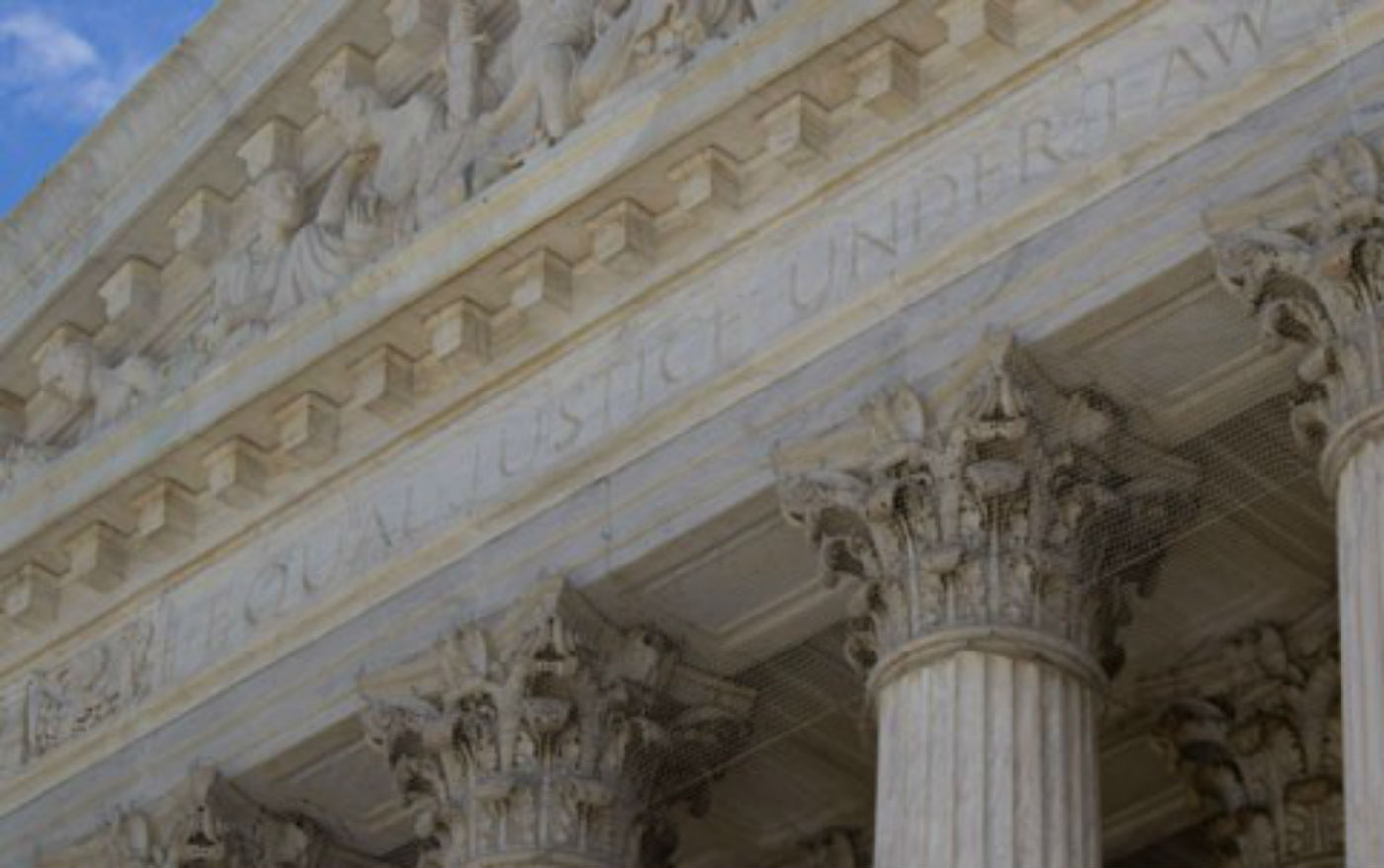 The “Marketplace of Ideas” was first coined in 1859 as a concept by John Stuart Mill (a British philosopher and political economist) in his book, On Liberty, and revolves around the notion that when public discourse is open and transparent, it leads to a greater sense of objective truth. Over time, the phrase began to find its way into the courtroom, including the United States Supreme Court. Justice Oliver Wendell Holmes wrote the dissent in Abrams v. United States (1919) and addressed the “free trade of ideas” within the “competition of the market.” The actual phrase was first used by Justice William Douglas in United States v. Rumely (1953).

A 1969 landmark decision (Brandenburg v. Ohio) solidified the broad construct of “free speech” within the marketplace of ideas and affirmed the legal precedent that the government cannot punish inflammatory speech unless it is purposely used or likely to incite “imminent lawless action.” This “test,” also known as the Brandenburg Test, had three distinct elements: intent, imminence and likelihood. The majority ruling in this case—other than some narrow exceptions—has been the pillar of free speech law for the United States since that time.

In the 21st century, threats to the freedom of expression within the marketplace of ideas can be seen in various attempts to define and enforce laws pertaining to “hate speech.” In general, hate speech includes speech, writing, gestures, conduct or displays that may incite violence or prejudicial action against or by a protected individual or group. Historically, this includes gender, ethnic origin, religion, race, disability and more recently, sexual orientation. For some, hate speech is akin to the word, “Newspeak,” which is derived from George Orwell’s book, Nineteen Eighty-Four, and describes the totalitarian attempt to limit the freedom of thought and self-expression.

The First Amendment to the Constitution given in the Bill of Rights (1791) protects the freedom of speech. The 14th Amendment (ratified in 1868) extends this right at the state level. Since that time, the legal system has basically ruled favorably to protect free speech when it comes to the content of expression, as compared to the mode of expression. U.S. Supreme Court decisions in A.V. v. City of St. Paul (1992) regarding a cross burning by a white gang and Snyder v. Phelps (2011) involving the public protests of Westboro Baptist Church against homosexuality are recent examples.

The arguments for and against the freedom of speech/expression and behavior within the marketplace of ideas is increasingly in the spotlight when it comes to cultural values. Examples include the sanctity of life (e.g., employers under the Affordable Care Act being forced to provide coverage in their health insurance policies for abortion and/or abortifacient contraceptives), the traditional definition of marriage (e.g., state laws being vacated by the U.S. Supreme Court in granting marriage licenses to same-sex couples), and violation of conscience issues (e.g., the Kleins, owners of Sweet Cakes Bakery in Oregon, for refusing to bake a wedding cake for a same sex couple and Elaine Huguenin’s refusal to photograph a same sex marriage in New Mexico).

Court decisions at the state and federal levels, as well as legal precedents are all on the increase regarding these kinds of issues. One reason is the significant rise in regulatory standards and state licensing laws among a growing list of professions and businesses. According to University of Minnesota labor professor, Dr. Morris Kleiner, almost 25% of all workers in the United States are now required to secure a state license in order to practice their profession—nearly a fivefold increase over the past 60 years. While the purported intent may seem reasonable—to improve the quality of services that are being rendered—an alarming consequence is the parallel increase on attempts to limit religious freedom. See Storman’s, Inc. v. Wiesman, where a three-judge panel of the Oregon Ninth Circuit of Appeals ruled against a pharmacist for refusing to deny customers contraceptive prescriptions based on religious beliefs.

The original intention or original meaning of the First Amendment was not to exclude religious expression from the public square.

The U.S. Constitution does not limit the freedom of religion to only the “freedom of worship.”

Matters of conscience are not merely theoretical or philosophical, but impact decisions of daily living.

The free exercise of religion includes the freedom to hold beliefs and act according to the conscience that is formed by those beliefs.

Many National Days of Prayer, Fasting and Repentance throughout our nation’s history from the first permanent settlement at Jamestown, VA in 1607, until the present day, and from our Founding Fathers to ordinary citizens who cherish this country’s heritage, prayer has played a vital role in strengthening the very fabric of our society.

President George Washington set aside Thursday,  November 26, 1789, as a day for, “public thanksgiving and prayer.”  His intention was to set a non-sectarian tone for personal devotion that emphasized the political, moral and intellectual blessings that sustained America’s form of self-government.

The Aitken Bible was the first known English-language Bible to be printed in the colonies (in 1782) and was dubbed, the, “Bible of the Revolution.”  It was approved by the Congress of the Confederation.

The use of opening prayer for legislative sessions – at both federal and state levels – is a longstanding tradition and derives, in part, from both houses of the British Parliament.

Congress first instituted the Office of Chaplain in 1789 as a means to implement the practice of prayer prior to their meetings, as well as provide pastoral care and hospital visitation, coordinate memorial services, host visiting religious figures, and render moral and spiritual support.

Every one of the fifty State Constitutions acknowledges God in their preambles.

The Northwest Ordinance, also known as the Freedom Ordinance, passed by Congress on July 13, 1787 and re-ratified under the U.S. Constitution in 1789, provided instruction for the integration of new states and was the primary governing document in the territory northwest of the Ohio River.

Churches in the United States have officially enjoyed federal income tax exemptions since congress passed the Tariff Act in 1894.

“In God We Trust” was adopted as the official motto of the United States in 1956.

Take Action
Pray for the protection of religious liberty in the marketplace.
Resources
Religious Liberty and the Rights of Conscience Political History of Religious Exemptions The Equality Act of 2015

Freedom Of Conscience Not An Option For Churches in California

“…the HHS Office of Civil Rights upheld a California abortion mandate that requires churches in California to pay for elective abortions.”

ObamaCare Rules Set Up A Miry Pit For Religious Freedom

“An attorney suggests that new rules affecting the Affordable Care Act may make it vulnerable to another round of lawsuits.

Victory for Churches in Iowa!

“The Iowa Civil Right Commission revised its brochure regarding a state law that makes it possible for the government to punish churches for operating according to their beliefs. ADF will continue to challenge the still-vague law, however, to bring certainty to Iowa churches.”

A federal judge struck down Mississippi’s religious freedom law which protects citizens’ rights to peacefully live and work according to their beliefs about marriage.

Missouri Tells Supreme Court That Discrimination Against Churches Is Proper

“Alliance Defending Freedom attorneys representing an Iowa church filed a federal lawsuit Monday against members of the Iowa Civil Rights Commission, among others, to stop the government from censoring the church’s teaching on biblical sexuality and from forcing the church to open its restrooms and showers to members of the opposite sex.”

Pastor Battles City in Colorado Over Rights to Faith-Based Ads

“A local pastor is battling a Colorado city over his church’s Jesus-related ads on public transit benches. The controversy in Colorado Springs involves ads on about 20 bus stop benches that say ‘Jesus is Lord.’ Pastor Lawson Perdue of Charis Christian Center said he was told that the ads will no longer be allowed if they refer to Jesus, the Colorado Springs Gazette reported Friday.

Cross Removed From Seal in California

“The Los Angeles County Board of Supervisors voted 3-2 behind closed doors to accept a judge’s ruling in favor of the American Civil Liberties Union of Southern California, which sought to eliminate the small cross on the redesigned seal.”

“…Alliance Defending Freedom and Jones Day attorneys representing the Allegany County commissioners filed a motion to dismiss a lawsuit that seeks to uproot a Ten Commandments monument on the county courthouse grounds that is nearly identical to one the U.S. Supreme Court upheld in 2005.”

“Iowa Gov. Terry Branstad is encouraging citizens of his state to spend more time reading the Bible, by calling for a Bible-reading marathon. However, a couple of organizations are threatening to sue over what they believe is a violation of the separation between church and state.”

The Stormans of Washington are Standing for Religious Freedom

Nurse Forced To Choose Between Job and Deeply Held Convictions

Sandra Mendoza, a pediatric nurse with the Winnebago County Health Department in Illinois is suing the Department after being forced from her job of 18 years after the health administrator combined the pediatric clinic and women’s health services.

Government Agency Opts Itself Out of Religious Freedom Law

An Orthodox Jewish woman is suing her employer, the Metropolitan Washington Airports Authority, for taking action that violates her religious freedom. Susan Abeles had worked for the Authority, which governs Dulles and Reagan airports, for 26 years and had always been allowed time off for Passover.

“A federal court ordered North Carolina State University to immediately halt its policy that requires Christian students to obtain a permit before gathering.”

“It began in 2013 when Marine Lance Cpl. Monifa Sterling – a devout Christian – wanted to express her religious beliefs in the workplace where she was stationed at Camp Lejeune, North Carolina.”

DOJ's Lawsuit Against North Carolina Is Abuse Of Power

“North Carolina, has sustained unrelenting and coordinated attacks from big business, the entertainment industry, the ACLU, and now the federal government over its common sense bathroom policies.

79 Crosses and The First Amendment

“Liberty Counsel has some legal advice for an atheist in Georgia who opposed a public display of the Christian cross during Memorial Day.”

“The 8th Army is looking into a complaint that the use of a Bible during a military ball violated a soldier’s religious freedom. The soldier wrote to the Military Religious Freedom Foundation after a Bible was included in a POW/MIA table display at the Adjutant General’s Corps Ball sponsored by the Morning Calm chapter on May 13.