In God We Trust, Restoring the true spirit of America 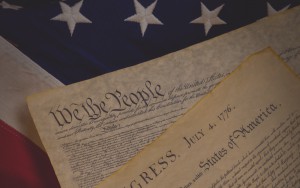 For nearly 240 years, America has placed its trust in God. This humble faith has given our nation strength in war-time, dignity and compassion toward those less fortunate, and hope in the face of unprecedented challenges.

The spirit of America is derived from deeply held Judeo-Christian values. We see these principles woven into the very fabric of our founding documents. They give substance to the freedoms we all cherish and echo in the words and prayers of patriots who rose up together with one voice.

The battle for faith and religious freedom has been elevated to the fore- front of our national discourse. For decades, there has been an undercurrent of targeted efforts to remove God from every vestige of American life. These battles now confirm a tangible reality that the things we hold sacred are slowly eroding all around us.

Unelected bureaucrats seek to remove God from the public domain, while rogue court challenges by anti-God fac- tions and widespread misrepresentation of the phrase “separation of church and state” create a climate for censorship and promote religious discrimination.

The intolerant have commanded center stage long enough. John Quincy Adams, the sixth president, said, “The highest glory of the American Revolution was this: It connected in one indissoluble bond the principles of civil government with the principles of Christianity.”

If, as some advocate, public acknowledgement of God must be eliminated in the United States, by default the government
then assumes sole authority as the final arbiter of moral order. There are neces- sary and appropriate limits on how much power should be exerted over life, liberty and the pursuit of happiness.

The family, civil government and the church historically have been seen as society’s building blocks, yet each has regressed and lost influence. Post- modernism has exacted its toll and pushed these institutions to the breaking point. Either a complete collapse may

be forthcoming, or those who operate within their boundaries will summon the courage to restore a necessary bal- ance of truth and moral responsibility. The alarming trend to erase God from America’s memory must make religious liberty a priority.

The time has come to make a stand. The Congressional Prayer Caucus, estab- lished in 2005 by Congressman Randy Forbes, has assembled as a frontline defense against attacks on religious lib- erty. To combat the attempts to change our national motto, in November 2011 the U.S. House of Representatives voted overwhelmingly (396-9) to reaffirm
“In God We Trust” as the official motto of the U.S. and strongly encouraged
its overt display in our schools and public buildings.

Inspired by this landslide vote, the Congressional Prayer Caucus Foundation launched the initiative, “In God We Trust—Put It Up!” (ingodwetrustmotto.us) as part of a pro- active strategy supported by national and state lawmakers to protect God’s enduring and rightful place in America. Citizens are taking advantage of this opportunity by contacting city officials, school boards, etc., to have our national motto placed on logos, in classrooms and throughout the public square. Truth without action renders the recent Congressional vote irrelevant. The United States lies at the threshold of a significant crossroad: either to acknowledge and embrace the character of our spiritual heritage or to plunge headlong into the postmodern void—an amoral vacuum that seeks to deconstruct much of what we consider sacred.

Will you let your voice be heard?

Lea Carawan is the executive director of the Congressional Prayer Caucus Foundation.

Bringing the Bible Back: Could Growing Public School Movement Backfire?