60th Anniversary ‘In God We Trust’ Blitz a Huge Success! 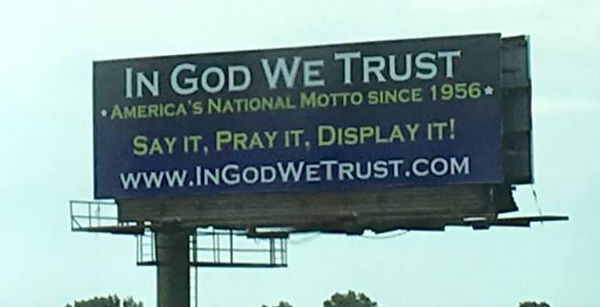 The response to the “In God We Trust” Anniversary Blitz has been overwhelming! Thanks to all of our partners, inspired citizens and motivatedgovernment leaders, the nation heard a resounding declaration, “In God We Will Trust!”

Here are just a few of the highlights:

Sixty years ago, President Eisenhower and the 84th Congress formally made “In God We Trust” our National Motto, and in doing so, publically reinforced one of America’s greatest legacies. It has been referenced by Presidents, inscribed on our currency, and is found in the fourth verse of The Star Spangled Banner. God is acknowledged in the Pledge of Allegiance, and has been a source of hope and confidence since our inception.

In this election cycle, religious liberty is being hotly debated in the national dialogue. We must do everything we can to preserve and protect our sacred freedoms.

The Anniversary celebration was just the beginning. Be encouraged! Our message is resonating… we will continue the mission to advance Judeo-Christian values and principles. Our goal is to see the National Motto proudly displayed in classrooms, court houses, government chambers and offices, in homes, businesses, and churches… everywhere a flag is flying.

Get your “In God We Trust” decal, lapel pin, or t-shirt and take a stand with us. Learn more. Let’s build on the successes of this past week and continue the movement.