Are you a Christian? Many would answer affirmatively. Some would hesitate. Others might wonder about the motive behind the question. What if the barrel of a gun was pressed firmly against your forehead? 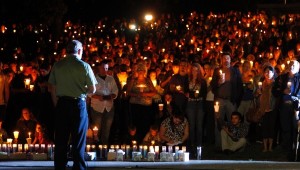 Such was the case during the recent tragedy at Umpqua Community College in Roseburg, Oregon. Mathew Downing—a survivor of the shooting and member of New Beginnings Church of God—recounted how the crazed killer coldly murdered several of his peers solely because they said, “Yes.” Wiping away tears during a memorial service, Pastor Randy Scroggins stated, “As those brave men and women were willing to stand and take a bullet for their faith… so let us bravely stand this day and live our faith…” Scroggin’s own daughter, Lacey, was also in the classroom at the time, and survived only because a victim lay on top of her bleeding from his wounds.

All violence is abhorrent and there are many factors that are being hotly debated in the public square right now. However, what we must also acknowledge is that people of Christian faith are increasingly being targeted on many different fronts. They are bullied and pilloried by the liberal press, censored by those who attempt to control the media. They are often mocked and derided on television and through film—characterized as out-of-touch, judgmental, homophobic, hatemongers, extremists, and more. In worse case scenarios, Christians around the world are intentionally being hunted down, arrested, imprisoned, persecuted and martyred for their beliefs.

According to the Ethics and Religious Liberty Commission, an entity of the Southern Baptist Convention, Christians are the most persecuted group worldwide. This reality impacts nearly 200 million believers in over 60 countries and is even being acknowledged by the U.S. State Department. One persecution watchdog, Christian Freedom International, indicates that a Christian is killed for his or her faith every five minutes somewhere across the globe, with ISIS and other terrorist groups being the most notorious. This translates into over 100,000 people per year. Sadly, American victims in Oregon have now been added to the growing list of casualties.

There was a day when we had to look overseas to hear about those suffering for their faith. Now, the stories are coming from inside America, from our own shores and within the homeland. The anti-God rhetoric in this country is reaching unprecedented levels and must not go unchallenged!

I have written about these disturbing trends several times over the past couple of years, but I would be remiss if I failed to keep this issue before us. America—and particularly the Body of Christ—are you listening? We must wake up, take our collective heads out of the sand, and stay alert! It is simply naïve and also dangerous to believe that our nation, as great as we know it to be, is incapable of a long, slow descent into moral decay, resulting in the corporate loss of religious liberties and the Constitutional protections we too often take for granted.

The loss of cherished freedoms is almost never that overt, at least not initially. The changes are subtle, indirect, and often couched in the language of “accommodation” and political sound bites. Yet, make no mistake, anti-faith groups in this country have an alarming agenda and much of what our Founding Fathers gave their lives fighting for, is being slowly and systematically eroded in the heat of a shifting culture.

Many of our colleagues and organizational friends are standing in the gap, for which we are so very grateful, but we are also in the fight. The CPCF is on the frontlines of the battle and we need your help. There is much you can do right now: consider starting your own Room 219 Prayer group, putting up our National Motto (In God We Trust), writing letters of support and encouragement to the government leaders who are defending your freedoms, scheduling a PrayUSA Sunday event at your church with a government leader, resourcing yourself with the right information so you can be effective in the marketplace of ideas, making a financial gift so together we can do more, and above all, being fervent in your prayers for our nation. Everything you need to get started is right here.

In another era not that long ago, Dietrich Bonhoeffer, a Lutheran pastor, theologian and anti-Nazi dissident offered these sobering words during World War II, “Not to speak is to speak. Not to act is to act. Silence in the face of evil is evil itself.” My friends, it is time to speak… it is time to act… and it is time to no longer be silent.