An Urgent Call to Our Knee

The storm is upon us and we must be engaged and ready for action. On April 28, the Supreme Court will hear oral arguments in Obergefell v. Hodges, a federal lawsuit where the plaintiffs are suing for Ohio to validate same-sex marriages that are

permitted/solemnized in other jurisdictions. This particular case concerns a same-sex couple who was married in the state of Maryland and is alleging their 14th Amendment rights of due process and equal protection are being violated for failure to recognize the union. It is being consolidated with three other cases: Tanco v. Haslam (Tennessee), DeBoer v. Snyder (Michigan), and Bourke v. Beshear (Kentucky).

At issue here is whether or not individual states, as voted on by the people, will retain the freedom to define marriage as the union of one man and one woman. Nothing in the U.S. Constitution requires all 50 states to hold marriage in the same manner. However, an unfavorable ruling by the Supreme Court not only undermines state sovereignty, but will further diminish America’s Judeo-Christian heritage, individual religious liberties and one of our most time-honored and God-ordained institutions. In a Constitutional Republic, the people should have the authority in such manners.

In examining the cornerstone documents that have guided us for over 230 years, the Founding Fathers sought to establish a form of government that would secure the fundamental principles promoting and respecting human dignity and liberty. The Declaration of Independence describes the nexus between a sovereign God and human rights. The purpose of the Constitution was to establish a federal government with certain enumerated, but limited authority, thus giving the power to “We the people.” The Bill of Rights ensures and protects the freedoms of all citizens, reserving some powers to the states and the general public, including the freedom of religious expression and free speech.

Today, these hallowed principles are being undermined and trampled upon by increasingly emboldened anti-faith activists, growing government overreach and what amounts to judicial tyranny. Numerous leaders are making every effort to protect our fundamental rights; however, it’s you, our citizens who must exercise your authority to stand against injustice, to raise your voices in the halls of power and not be silent as our freedoms are being eroded. Right now, we must come humbly before God and pray for His mercy and intervention.

Listen to the words of Thomas Jefferson, which are inscribed in stone in the Jefferson Memorial in our nation’s capital: “Almighty God hath created the mind free. All attempts to influence it by temporal punishments or burthens…are a departure from the plan of the Holy Author of our religion…No man shall be compelled to frequent or support any religious worship or ministry or shall otherwise suffer on account of his religious opinions or belief, but all men shall be free to profess and by argument to maintain, their opinions in matters of religion. I know but one code of morality for men whether acting singly or collectively.”

Some seek to detract from this alarming attempt to radically change our form of government by convincing a generation that the definition of marriage is another civil rights movement. Sexual preference is being elevated to the same standard as race and gender and there are those who are demanding the same protections. Currently, individual states give the people the authority to determine what policies and legislative initiatives are best for their respective state. Now, in a matter of days, nine Supreme Court Justices will essentially begin deciding whether or not to override the will of the people across the country and effectively rescind their Constitutional right to establish their own duly passed laws on this issue.

By in large, the United States remains an overtly spiritual nation. The tenets of the three major religions in the United States (Christianity, Judaism, and Islam)—which represent 84% of the general population—address the subject of sexual orientation and behavior and all teach that natural marriage is a sacred and holy union between and man and a woman.This reality underscores the overwhelming relevance of faith values and beliefs in our culture. A judicial ruling on the wrong side of the issue not only infringes on religious liberties for the vast majority of Americans, it also coerces citizens to deny their convictions and compels them to affirm the government’s definition of marriage.

If the trend to fundamentally change our nation continues, faith values will be increasingly marginalized and Christians will continue to be wrongly labeled as discriminatory simply for holding to traditional views on marriage. We cannot and we must not passively sit on the sidelines and allow our right of conscience to be dictated by the state. This only denigrates the dignity of each person and the stability of our self-governing Republic. Chaplains and pastors are already required to officiate same sex marriage ceremonies and businesses are forced to provide services that compromise their beliefs or conflict with moral convictions. To do otherwise brings the risk of job removal, heavy fines, lawsuits, public outcry from a liberal media and even jail time. Our nation is surely at a crossroads. A role of government is to protect the First Amendment freedoms of the American people, not coerce or impose fines upon those that live out their faith in the public square. 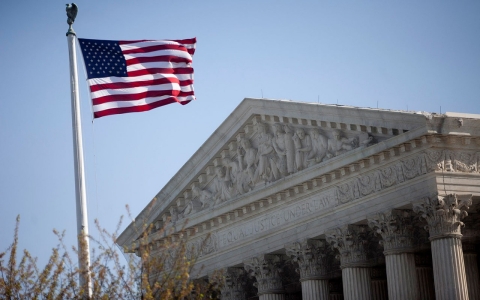 The challenges facing America are real and they are significant. The time has come to shake off our lethargy and discouragement, to awaken the slumbering giant that is the church, and to refocus and remind ourselves that history – and the God we serve – is with us. America has put her trust in God since our inception and He is not hindered by anything or anyone. He is simply looking to His people to humble themselves, repent and seek Him on their knees.

There are hundreds of churches and prayer networks in communities all over the country that are gathering for a time of prayer and fasting. Organizations are circulating petitions and holding briefings. Concerned citizens are blogging and using social media outlets as a means to galvanize grassroots efforts. We cannot urge you strongly enough to pray fervently for the Supreme Court Justices and their ruling on this case. Never has so much been at stake.

We want to leave you with a quote from Congressman J. Randy Forbes, Founder and Co-chair of the Congressional Prayer Caucus: “Freedom of conscience can include nothing less than the way a person lives all aspects of his or her life. As a nation, our laws must encourage and support, not penalize, citizens who seek to adhere to their moral convictions.”