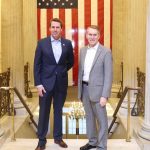 We wanted to share this important announcement with you. We’re very excited that Congressman Mark Walker (NC) will now join Senator Lankford (OK) as a co-chair of the Congressional Prayer Caucus. Though we will miss Congressman Forbes’ leadership in the U.S. Capitol, the Congressional Prayer Caucus will continue to grow in strength and influence with the new leadership.

WASHINGTON, DC — Congressional Prayer Caucus co-chairman Senator James Lankford (R-OK) and former Rep. Randy Forbes (R-VA) today announced that Rep. Mark Walker (R-NC) will serve as the new House co-chair of the Caucus. Rep. Walker will assume the leadership role previously held by Forbes, who founded the Caucus in 2005 to protect the right of individuals to pray and practice their faith freely.

“Our nation was founded on the solid conviction that all men were endowed by their Creator with certain inalienable rights, yet across America, faith has come under attack,” said Forbes. “Freedom of conscience is part of who we are as a nation, and we must preserve this fundamental freedom in our nation. That’s why I founded the Prayer Caucus. Today, the strength and size of the Caucus is a testament to the importance of protecting and preserving our nation’s Judeo-Christian heritage. I look forward to not only seeing the Caucus grow, but to continue its work to preserve the presence of religion, faith, and morality in the marketplace of ideas.”

“I am extremely grateful for Rep. Randy Forbes and his leadership of the Congressional Prayer Caucus over the last decade,” said Lankford. “America is stronger because of his commitment to creating this Caucus, and being a consistent champion for religious freedom. Our nation is a diverse country that values the freedom to have faith or have no faith at all. It is vitally important that Congress respects these values in public policy, as well as culture. The Congressional Prayer Caucus has worked successfully to advocate for and protect values that are fundamental to the fabric of our nation, and I’m honored to have Rep. Mark Walker serve as co-chairman.”

“I am honored to serve as Co-chair of the Congressional Prayer Caucus with my good friend Senator Lankford,” said Walker. “Prayer is a source of strength and hope for so many Americans – a source we must recognize and protect. Though politics can be divisive at times, prayer should be a uniting force for Congress and for our nation. I look forward to serving the caucus and fighting to protect one of the foundations of our First Amendment.”

In January 2015, Lankford became the first senator to join the Caucus since its founding in 2005, making the Caucus bicameral. Lankford first joined the Caucus after his election to the U.S. House of Representatives in 2010. Before 2010, Senator Lankford served in full-time ministry for 22 years. Most recently, he was the Director of Student Ministry at the Baptist Convention of Oklahoma and Director of the Falls Creek Youth Camp, the largest youth camp in the United States.

The Congressional Prayer Caucus recognizes the vital role that prayer by individuals of all faiths has played in uniting Americans as a people, and in making us a more generous, more cooperative, and more forgiving people than we might otherwise have been. The Congressional Prayer Caucus has also served to successfully promote efforts that protect the free exercise of religion for all Americans, no matter what faith tradition they observe.

During the 114th Congress, the Congressional Prayer Caucus maintained a bipartisan, bicameral group of more than 90 Members, and the Caucus has experienced many successes since its founding in 2005. The Caucus advocated for a change in military regulations governing religious expression; passed legislation reaffirming ‘In God We Trust’ as our national motto; defended the practice of legislative prayer; and advocated for the reversal of the policy at Walter Reed Medical Center that prohibited individuals from using or distributing religious items during visits to the hospital. The Caucus has also defended the right of religious student groups to operate on secular campuses according to their faith; urged the Administration to protect religious hiring rights; supported legislation to ensure that all child welfare service providers have the equal opportunity to serve children and families; and worked to ensure that our national motto and Pledge of Allegiance were included in the US Capitol Visitor Center.

In 2017, the Caucus will continue advocating for the free exercise of religion for people of all faiths.