Six members of the Georgia delegation to the US Congress sent a letter last week to Atlanta Mayor Kasim Reed complaining about the firing of the Atlanta fire chief for expressing his religious views on homosexuality. 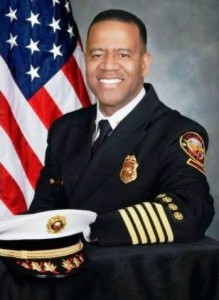 Kelvin Cochran was first suspended and then fired on January 6th after complaints arose about a book he self-published last year. In Who Told You that You were Naked, Cochran wrote, “Uncleanness — whatever is opposite of purity; including sodomy, homosexuality, lesbianism, pederasty, bestiality, all other forms of sexual perversion.”

The Congressmen told the Mayor, “Chief Cochran’s termination appears to have occurred because he wrote a 160 page book for his bible study in which one and a half pages describe his Christian beliefs regarding proper sexual ethics. Despite writing the book on his own time, Chief Cochran has been accused of engaging in ‘discrimination’ for merely expressing his religious beliefs.”

“Chief Cochran’s book was published over a year ago, and there is no evidence that Chief Cochran has ever discriminated against or been the subject of any complaints of discrimination while serving in the Atlanta Fire Rescue Department,” the Congressmen said.

In fact, an internal investigation conducted by the Atlanta mayor concluded that Cochran had never discriminated against LGBT personnel.

The Congressmen accused the Mayor of appearing “to violate the fundamental principles of free speech and religious freedom. Chief Cochran relied upon religious text from the Bible to express his opinion in his personal writings. The only way Chief Cochran could avoid his views would be to disown his religion.” The Congressmen accused the City of Atlanta of discrimination against the fire chief based on his religious faith.

Before the Mayor fired the Chief, he said Cochran’s trouble had nothing to do with his religious beliefs but rather that he had violated policy by publishing a book without permission. However, when he fired Cochran, the Mayor contradicted himself, saying, “[The Chief’s] actions made it a difficult work environment for lesbian, gay, bisexual, and transgender employees within the Atlanta Fire Rescue Department. This sends a strong message to employees about how much we value diversity and how we adhere to a non-discriminatory environment.”

The Congressmen asked the Mayor to reconsider Cochran’s firing and to reinstate him.