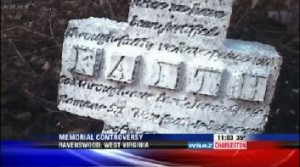 RAVENSWOOD, W.Va. (WSAZ) — A school in Jackson County, West Virginia, is facing religious scrutiny over a memorial honoring a teacher who passed away.

Ravenswood Middle School received a letter from the Freedom of Religion Foundation, saying it violates the First Amendment.

One by one on Wednesday, cars drove by Ravenswood Middle School, catching a glimpse of what may be the most controversial thing in town.

“I think that everybody is very outspoken,” said Tracie Sadecky.

Unfortunately, Sadecky remembers why the memorial was put up in the first place.

Back in 2004, Joann Christy, a teacher who taught at the school for more than a quarter of a century, was killed in an accident.

Sadecky, along with some others, feel that memory may soon slip away.

The Freedom of Religion Foundation recently notified the school, saying the crosses and angels on the memorial are a violation of the separation of church and state.

“The First Amendment mandates that schools cannot advance or promote religion, so that’s what this display is doing,” said Patrick Elliott, a staff attorney with FORF.

Christy’s family understands the conflict with the crosses and has removed them; however, the angels remain.

They say they’re not religious, but a true representation of who Christy was.

WSAZ asked the FORF if there can be a mutual understanding.

“If there is an angel, that is more so a representative of that particular person. I’m not sure there would be a legal issue with that,” said Elliott.

The FORF also called into question a live nativity scene during a Christmas program at Ravenswood High School.

The school says they will talk about these matters at its next board meeting, which begins at 7 p.m. Thursday, Feb. 19.

JACKSON COUNTY, W.Va. (WSAZ) — The Freedom of Religion Foundation recently sent a letter to the Jackson County Schools superintendent about what it referred to as “serious constitutional violations” regarding religious symbols at schools in the county.

The letter to Superintendent Blaine Hess referenced “multiple Latin crosses” in a garden near an entrance to Ravenswood Middle School, along with several angels, as well as a live nativity scene at Ravenswood High School during a Christmas concert in December.

The letter closed with:

“We respectfully request that you investigate the matters at Ravenswood High School and Middle School to ensure that the school concerts and displays meet the requirements of the Constitution.”