Illinois was a success! 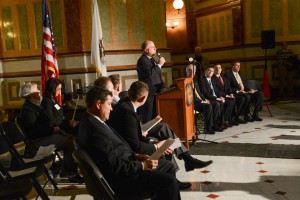 Last Thursday, February 5th, was a historic day in Illinois as a bipartisan and bicameral group of over 30 legislators established the Illinois Legislative Prayer Caucus. While the House recessed early due to weather conditions, preventing some from participating in the event, several senators and representatives remained and helped create an inspiring and memorable gathering. Legislators were joined by passionate citizens in the Rotunda of the State Capitol as they added Illinois as the fifteenth state to the growing network of like-minded government leaders.

The event was hosted by the members of the Illinois Legislative Prayer Caucus and emceed by its Chairman, Senator Sam McCann. Throughout the program, the Rotunda was filled with spontaneous applause as citizens expressed their enthusiastic support. During the reading of the actual Proclamation, it was  evident that those in attendance believed God can and will change America.

This was especially true when 2 Chronicles 7:14 was read aloud, “If My people, who are called by My name, will humble themselves and pray, and seek My face, and turn from their wicked ways, then I will hear from heaven and heal their land.” The video and images of the launch will be available soon at www.IllinoisPrayerCaucus.com. 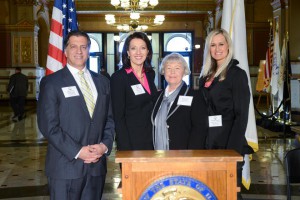 Our team was deeply touched by the warm welcome from legislators and citizens alike. We left feeling as if we had connected with family and are committed to their ongoing need for encouragement and support. The announcement of the In God We Trust. Put It Up! Campaign, a movement created in response to the victorious 2011 Congressional vote to re-affirm this phrase as our national motto, caused overwhelming cheers from the attendees. Many were inquiring about how they can put up our motto in schools, government buildings, local businesses, etc. 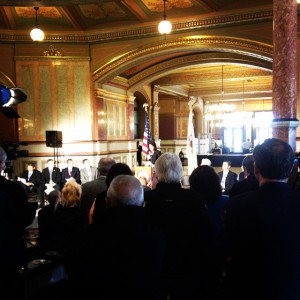 We are grateful for the citizens who recognized this is an opportunity that could not be passed up that could not be passed up and came out to show their strong backing! At all Call To Prayer events, legislators and citizens seal their commitment by signing the Call to Prayer Proclamation for their state. In doing so, they are publicly declaring their commitment to pray and take action to protect our Judeo-Christian heritage and religious liberties. Read the text of the Call to Prayer for America here; it embodies the inspiration for all the State Legislative Prayer Caucus Proclamations. Our goal is to have a formed, fully operational and effective legislative prayer caucus in every state.

Your prayers and ongoing financial support are greatly appreciated.

Together, we are making a difference.