“In God We Trust” – Standing Up for Our National Motto

This year marks the 60th Anniversary of when President Eisenhower signed a law on July 30, 1956, making “In God We Trust” the official Motto of the United States after a joint resolution by the 84th Congress (P.L. 84-851).

Our National Motto has been referenced by Presidents, inscribed on our currency, and is found in the fourth verse of The Star Spangled Banner. God is acknowledged in our Pledge of Allegiance, and has been the source of America’s hope and confidence since its inception. Dependence upon God and the integration of a divine Creator into American life even predates our Founding Documents. 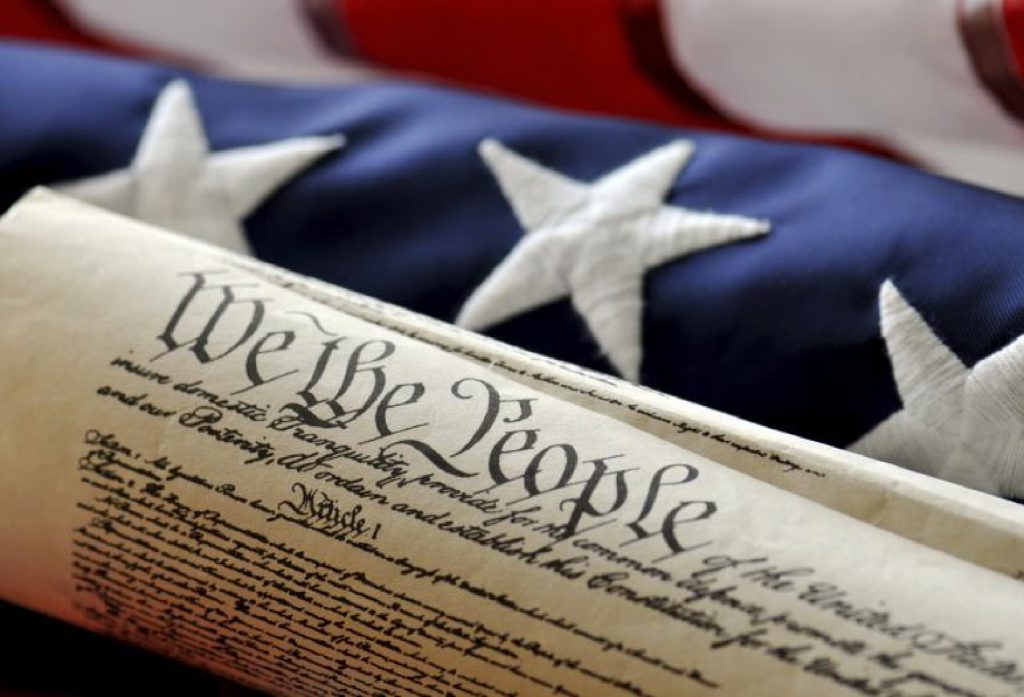 The courts have consistently and repeatedly upheld the motto as constitutional and something clearly NOT in violation of the First Amendment rights guaranteed to all Americans. In November, 2011, the House of Representatives passed House Resolution 13 in a landslide vote (396-9) to reaffirm “In God We Trust” as the official Motto of the United States, AND encouraged its overt display in schools and public buildings. View the text of H. Res. 13 on the CPCF website.

Inspired by this landslide vote, the Congressional Prayer Caucus Foundation launched the “In God We Trust: Put It Up!” initiative to proclaim God’s enduring and rightful place in America and as part of a proactive strategy reinforced by national and state lawmakers. 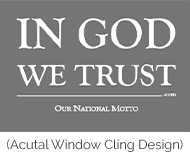 Today, you can join hundreds of government leaders, faith-based organizations, law enforcement agencies, Christian businesses, and churches who are boldly and proudly proclaiming their trust in God by placing window decals on their cars, and in their homes and offices. Get your In God We Trust decal and take a stand with us. Over 850,000 window decals have been distributed.  Learn more.

However, there are still a number of groups that work relentlessly to overturn these decisions. Both the First Liberty and Pacific Justice Institutes have offered to defend anyone, (on a pro bono basis) who receives threatening letters for displaying America’s National Motto.

In the Ninth Circuit Court of Appeals, the Pacific Justice Institute successfully defended “In God We Trust” printed on our national currency from attacks by atheist, Michael, Newdow in the case Newdow v. Lefevre. The Ninth Circuit unanimously agreed that America’s National Motto is constitutional.

One of the most recent challenges was brought by several individual plaintiffs and the New York Atheists and Freedom From Religion Foundation. The Honorable Harold Baer, Jr. , U.S.D. Judge in the District of New York, “Dismissed” the case after finding it had no merit. The plaintiffs in the case claimed they suffered harm because of the appearance of the words, “In God We Trust” on U.S. currency. They claimed this was a violation of the Establishment Clause of the First Amendment and further burdened their practice of Atheism and Secular Humanism, in violation of the Free Exercise Clause and the Religious Freedom Restoration Act (RFRA). The court set out three tests to determine if the Establishment Clause had been violated.

The Court’s “Opinion and Order” stated in part: “The Supreme Court has repeatedly assumed the motto’s secular purpose and effect, and all circuit courts that have considered this issue – namely the Ninth, Fifth, Tenth, and D.C. Circuit – have found no constitutional violation in the motto’s inclusion on currency.” The court also cited numerous legal cases and their finding that the motto is a form of “ceremonial deism” “…protected from Establishment Clause scrutiny…” Recent Supreme Court decisions affirming this analysis include: Van Orden v. Perry, 545 U.S. 677, 699 (2005) (Breyer, J., concurring); Elk Grove Unified Sch. Dist. V. Newdow, 542 U.S. 1, 37 (2004) (O’Connor, J. concurring).

When considering the use of religious references, including the National Motto, the Supreme Court and individual Justices have consistently and unequivocally determined those references to be constitutional. No member of the court, past or current, has suggested otherwise. In Allegheny, 492 U.S. at 602-03 (citations omitted), Justice Blackmun, writing for the Court and joined by Justices Marshall, Brennan, Stevens, and O’Connor, referred directly to the constitutionality of the National Motto. The four other Justices in Allegheny, Chief Justice Rehnquist and Justices Kennedy, White, and Scalia, explained that striking down traditions like the National Motto would be a disturbing departure from the Court’s cases upholding the constitutionality of government practices recognizing the nation’s religious heritage: “Taken to its logical extreme, some [statements in the Court’s past opinions] would require a relentless extirpation of all contact between government and religion. But that is not the history or the purpose of the Establishment Clause. Government policies of accommodation, acknowledgment, and support for religion are an accepted part of our political and cultural heritage… [W]e must be careful to avoid, “[t]he hazards of placing too much weight on a few words or phrases of the Court,” and so, we have “declined to construe the Religion Clauses with a literalness that would undermine the ultimate constitutional objective as illuminated by history.” Id. at 657 (Kennedy, J., concurring in part and dissenting in party) (quoting: Walz v. Tax Comm’n., 397 U.S. 664, 670, 671 (1970)).

In Elk Grove Unified Sch. Dist. v. Newdow, 542 U.S. 1, 37 (2004) (O’Connor, J. concurring) Id. at 37-43, Justice O’Connor acknowledged the historical underpinnings of religious references as, “In God We Trust.” She stated that it was not surprising to find, “…a Nation founded by religious refugees and dedicated to religious freedom should find references to divinity in its symbols, songs, mottoes, and oaths. Eradicating such references would sever ties to a history that sustains this Nation even today.” Justice O’Conner also referenced Id. 35-36 where numerous states have religious references on their license plates, state seals, flags, and mottos. Id.at n. “The oaths of judicial office, citizenship, and military and civil service all end with the (optional) phrase “[S]o help me God.” Many of our patriotic songs contain overt or implicit references to the divine, among them “America” (Protect us by they might, great God our King”); “America the Beautiful” (“God shed his grace on thee”); and “God Bless America.” O’Connor further rejected any claim of “coercion” by the use of ceremonial deism.

More importantly, Justice O’Connor held that the Establishment Clause is not so broad as to allow mere offense to religious references in the nation’s currency to convert the handling of money into religious coercion. She held, “It would be ironic indeed if this Court were to wield our constitutional commitment to religious freedom so as to sever our ties to the traditions developed to honor it.” Id. at 44-45. “The Constitution does not guarantee citizens a right entirely to avoid ideas with which they disagree. It would betray its own principles if it did; no robust democracy insulates its citizens from views that they might find novel or even inflammatory.” Id. at 44. See also: Cnty of Alleghency, 492 U.S. at 603-04 in which the court expressed the belief that the national motto poses no Establishment Clause problem.

Supreme Court Justice Brennen, generally known to be strict on separation of church and state, found that the National Motto was constitutional. He stated that the designation of, “‘In God We Trust’…can best be understood…as…ceremonial deism,’ protected for Establishment Clause scrutiny…Moreover, these references are uniquely suited to serve such wholly secular purposes as solemnizing public occasions, or inspiring commitment to meet some national challenge in a manner that simply could not be fully served in our culture if government were limited to purely non-religious phrases. The practices by which the government has long acknowledged religion are therefore probably necessary to serve certain secular functions, and that necessity, coupled with their long history, gives those practices an essentially secular meaning.” Lynch, 465 U.S. at 716-717 (Brennan, J., dissenting) (citations omitted); see also: Schempp, 374 U.S. at 303 (Brennan, J., concurring (stating the motto is interwoven, “so deeply into the fabric of our civil polity that its present use may well not present that type of involvement which the First Amendment prohibits”).

The lower courts have consistently upheld the constitutionality of the National Motto and its use in various forms. The Ninth Circuit dismissed the plaintiff’s claim in Aronow v. United States, 432 F.2d 242 (9th Cir. 1970) when it stated: “It is quite obvious that the national motto and the slogan on coinage and currency, “In God We Trust,” has nothing whatsoever to do with the establishment of religion. Its use is of a patriotic or ceremonial character and bears no true resemblance to a governmental sponsorship of a religious exercise.”

Numerous District Courts have also used the Aronow decision to hold the constitutionality of references to the national motto e.g. (W.D. TX 1978) (M.D.N.C. 2004) (E.D. Va. 2003), and have held that the use of the national motto, “In God We Trust,” does not violate the First Amendment rights or privileges of religious freedom.

The Supreme Court of New Hampshire, in Opinion of the Justices, 228 A.2d 161 (N.H. 1967) advised the New Hampshire Senate that a proposed resolution requiring all public schools to display in every classroom a plaque with the national motto inscribed on it would, “not offend the Establishment Clause of the First Amendment.” Id. at 164. 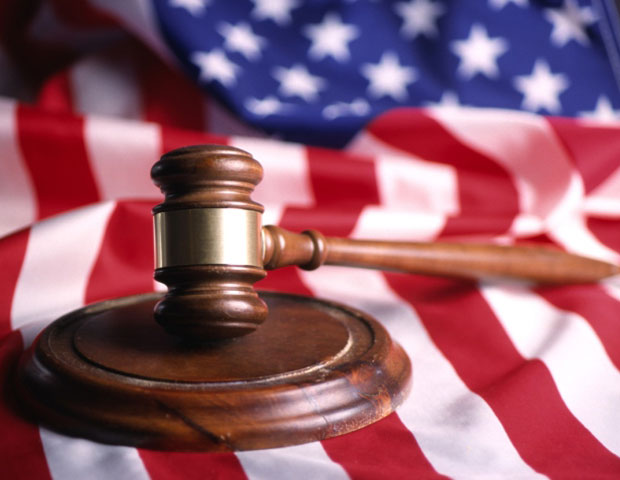 We can no longer naively deny that an increasing number of people want to alter our Constitution, nor can we sit idly by as the effort to fundamentally change our nation continues through various anti-faith elements in the country. This sobering reality is an opportunity for all of us – We The People – to stand up and speak up!

Many are attempting to deny our First Amendment rights, pressure people of faith, and say we aren’t allowed to display the Motto. They routinely cite old and tired arguments regarding the separation of church and state. And they are wrong! This is nothing more than a ruse. In fact, those who abhor our Judeo-Christian heritage are simply counting on us to not respond, not push back, not voice our opposition, or fight for our freedoms. My response and my passion is to say, “The one thing we will not do, is we will not go quietly in the night!

Let’s do our part to work together to champion our National Motto. Join the 2016 60th Anniversary Blitz and make a difference.