Members of Congress are taking a stand 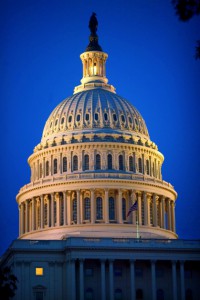 You’re primarily trained in seminary, not through boot camp or The Basic School (TBS). You’re not issued an M-16 or sidearm, but given the Word of God as your sword. Your Military Occupational Specialty (MOS) is not combat related, but specifically recognized as a Chaplain by the United States government. Your skill set is not field artillery, cyber warfare, explosive ordinance or any number of things, but in rendering spiritual care and comfort in the face of incredible stress. And yet, you are told again and again by your superiors that you are not allowed to fulfill the very job you were asked to do when you signed your contract.

Twenty-four U.S. Senators and House Representatives continue to fight against this kind of insanity and have written a letter to current Secretary of the Army, John McHugh, regarding a chaplain who was disciplined for simply giving spiritual guidance as part of a suicide prevention briefing to Army Rangers while stationed at Fort Benning, GA. After multiple combat deployments, chaplain and U.S. Army Ranger, Joseph Lawhorne, shared during a training class how his faith had helped him deal with his own depression. His transparency and concern for his fellow soldiers earned him a standing ovation from class attendees. However, because one soldier objected to Lawhorne’s use of a handout containing biblical, as well as secular approaches to handling depression, he is now being officially reprimanded by the Army. The stated goal for the individual in making a complaint was to ensure this situation does not set what he deemed to be a troubling precedent.

The reality here is that Chaplain Lawhorne was not imposing his religious beliefs on anyone, nor was he mandating that those in attendance follow his example. This was not a direct order, an official policy or a command dictate. He was merely sharing his personal experience in the hopes that it may assist others as they wage their own internal battles from the hidden wounds of combat trauma. Would it have been much different if he had suggested that listening to music helped him, or quiet meditation, or seeing a counselor, or any number of possible interventions? I think not.

On an entirely different battlefront, a New Jersey judge recently threw out a lawsuit against a school district seeking to remove the words, “under God” from the Pledge of Allegiance, which is recited daily by students. This case also resulted in a positive outcome in the fight for religious liberty. In Tinker v. Des Moines independent School District, an oft cited case, the Supreme Court ruled in 1969 that students do not, “shed their free speech rights at the school house gate.” During the Clinton Administration, then Secretary of Education, Richard Riley issued a “statement of principles” that outlined permissible religious expression in public schools. Every American—without exception—should be able to follow his or her conscience without fear of consequences, including the young and defenseless who need advocates.

Members of Congress have previously defended this phrase in the Pledge as constitutional, including the submission of an amicus curiae brief before the Supreme Judicial Court of Massachusetts by 38 Representatives during another attempt to have it eliminated. At the state level, Texas legislators passed the Religious Viewpoints Anti-discrimination Act in 2007 mandating that public schools are to treat a student’s voluntary expression of a religious viewpoint, if any, on an otherwise permissible subject, in the same manner as they treat a student’s voluntary expression of a secular or other viewpoint on an otherwise permissible subject and may not discriminate against the student based on a religious viewpoint. This includes the expression of religious beliefs in classroom and homework assignments, as well as organizing and participating in religious student gatherings to the same extent as secular non-curricular groups. Since then, at least five other states have successfully followed suit.

The truth is that those who oppose religious liberty are counting on you and I to be intimidated, passive, unorganized, underfunded and lacking the resolve and determination to engage in the public arena. They know that human nature often creates a, “someone else will do it” mindset, while they aggressively take the higher ground. We must not, cannot and will not allow that to happen!

Hundreds of national and state leaders are working to protect our Judeo-Christian heritage, freedom of conscience, religious liberty and the right for citizens to adhere to their moral convictions. We may be facing challenges as nation, however, a commitment to prayer is also on the rise and leaders and citizens all across America are working together to accomplish these goals.

Now, more than ever, we are asking you to join hands. Pray for us. Pray with us.  Your gifts and donations enable the CPCF to advance the cause of religious freedom. The lessons of history remind us all too well there is no guarantee the windows of opportunity remain open indefinitely. United we must stand. Together with God, we will win.