Ohio Lawmakers and Pastors Stand Together 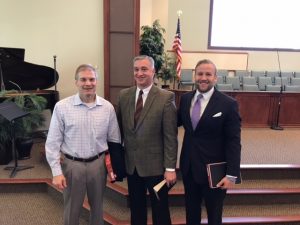 Congressional Prayer Caucus member, Congressman Jim Jordan, and Ohio Prayer Caucus State Director, Pastor Jason Williams, have a passion for prayer and are committed to bringing lawmakers and pastors together to ensure faith always has a place in the public square.

Together they are meeting with pastors to discuss the power of prayer when partnered with action, as well as the important role God has in the founding and future of America. Their inspirational message is bringing awareness to the aggressive attack on faith in America.

As the Ohio Prayer Caucus Network State Director, Pastor Jason Williams is working tirelessly to make people aware of the Ohio Legislative Prayer Caucus which is part of a nationwide movement of over 850 lawmakers in 31 states and congress. These lawmakers are committed to promoting prayer and protecting religious freedom, but they can’t do it without the engagement of like-minded citizens in every state.

Please keep these leaders in prayer. If you are interested in hosting a legislator or Jason at your church, simply contact him at Jason@OhioPrayerCaucus.com.