Our Leaders are Mobilizing Around Prayer

All over the country, churches and government leaders are sounding the alarmand calling people of faith to wake up, to stand up and to act cohesively as the Body of Christ.

On Sunday morning, Executive Director, Lea Carawan, was present when Skyline Church in La Mesa, California led the way as one of the first churches in the country to participate in the PrayUSA movement. Senior Pastor, Jim

Garlow, played the three-minute PrayUSA video and La Cajon Mayor Bill Wells read the Proclamation aloud. This was followed by two local government leaders—State Senator Joel Anderson (38th District) and Santee Mayor Randy Voepel—who joined Mayor Wells in leading church members in a signing ceremony. What followed was significant and encouraging—inspired by the challenge to reclaim our nation, hundreds within the congregation added their names and their voices in an atmosphere of humble petition before God.

My prayer is that Christians everywhere will rise up with passion, determination and remain united in purpose—to fight for our religious liberties and the sacred Judeo-Christian heritage we too often take for granted. Either we will be overwhelmed by the prevailing culture—wherever those winds may blow—or we will take the necessary steps for God to be recognized in the marketplace of ideas and see our nation renewed and transformed. 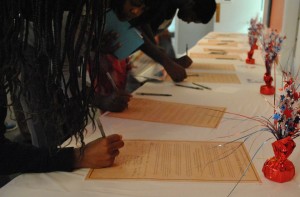 Almost simultaneously on the other side of the country, Greenbrier Church in Chesapeake, Virginia, was also holding a special PrayUSA Sunday. In their service, Pastor Eric Watt invited the congregation to come forward and sign the document after Chesapeake Mayor, Alan Krasnoff, read the Proclamation to those in attendance.

These are first steps and the movement is just beginning, but it is becoming stronger with each passing day. The PrayUSA Initiative—including a Proclamation for a Call to Prayer—is serving as a rally point in one of the most critical periods of our nation’s history. The Proclamation is being read in churches and signed as a public declaration. Today, nearly 700 government leaders across the United States, over 6,800 citizens and dozens of leading Christian organizations have answered the call. There is much to do and we need your help!

Skyline Church, like Greenbrier, is one church—one church that has said, “Yes!”There are tens of thousands of churches in America, from small groups who gather in homes to large metropolitan worship centers. The size is not important…what matters is that people of faith are rising up to be heard. it’s time to mobilize the army of God.

Your church can participate as well—the process is easy. If you are willing to become engaged and help promote this Initiative, a three-minute video and downloadable resource kits are available at www.PrayUSA.com. Everything you need is right there, including: instructions, bulletins, flyers, posters, a PowerPoint slide, sample emails, social media tips and much more! Will you carry the torch with us? 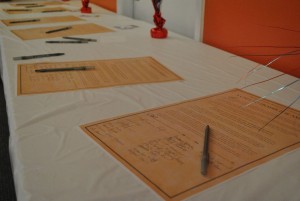 Congressman Randy Forbes, Founder and Co-Chair of the Congressional Prayer Caucus, offers words of hope, “Prayer is an act of faith that has unified the nation since our inception. Beyond our differences, we can be one voice, united in prayer as we strive to overcome the challenges that lie before us.”