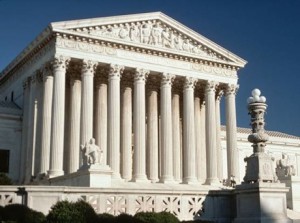 Earlier today, the Court issued a 5-4 opinion holding that the Due Process and Establishment Clauses of the 14th Amendment of the Constitution require all 50 states to issue marriage licenses to same-sex couples.

It is not the Supreme Court’s job to nullify public policy that has been democratically enacted in numerous states – just as the government should never coerce people to choose between their faith and their livelihood. Every American should be free adhere to their deeply held beliefs about marriage without fear of being punished by the government.

Below are some of the quotes that were extracted from the opinion. You can read the full opinion here.

I’ll follow up with more insights on where we go from here in the days ahead. This is a setback for religious freedom, however our beliefs and commitment to promoting prayer, preserving our Judeo-Christian heritage and protecting religious freedom remain undeterred.

Highlights from the Majority Opinion

The Supreme Court held that the Due Process and Establishment Clauses of the 14th Amendment require a state to issue a marriage license to a same-sex couple, stating, “Under the Constitution, same-sex couples seek in marriage the same legal treatment as opposite-sex couples, and it would disparage their choices and diminish their personhood to deny them this right.”

The Court provided 4 reasons for determining that same-sex couples have a right to be issued marriage licenses under the Due Process Clause:

The opinion gave a cursory nod to religious freedom concerns:

Cautionary Quotes from the Dissenting Opinions on Religious Freedom

“Respect for sincere religious conviction has led voters and legislators in every State that has adopted same-sex marriage democratically to include accommodations for religious practice.  The majority’s decision imposing same-sex marriage cannot, of course, create any such accommodations.  The majority graciously suggests that religious believers may continue to “advocate” and “teach” their religious views of marriage.  The First Amendment guarantees, however, the freedom to “exercise” religion.  Ominously, that is not a word the majority uses.”

“Unfortunately, people of faith can take no comfort in the treatment they receive from the majority today.”

“It is one thing for the majority to conclude that the Constitution protect a right to same-sex marriage; it is something else to portray everyone who does not share the majority’s “better informed understanding” as bigoted.”

“The majority’s inversion of the original meaning of liberty will likely cause collateral damage to other aspects of our constitutional order that protect liberty.”

“Aside from undermining the political processes that protect our liberty, the majority’s decision threatens the religious liberty our Nation has long sought to protect. . . . The majority appears unmoved by that inevitability.”

“[The decision] will be used to vilify Americans who are unwilling to assent to the new orthodoxy.  In the course of its opinion, the majority compares traditional marriage laws to laws that denied equal treatment for African-Americans and women.  The implications of this analogy will be exploited by those who are determined to stamp out every vestige of dissent.”

“I assume that those who cling to old beliefs will be able to whisper their thoughts in the recesses of their homes, but if they repeat those views in public, they will risk being labeled as bigots and treated as such by governments, employers, and schools.”

“By imposing its own views on the entire country, the majority facilitates the marginalization of the many Americans who have traditional ideas.  Recalling the harsh treatment of gays and lesbians in the past, some may think that turnabout is fair play.  But if that sentiment prevails, the National will experience bitter and lasting wounds.

Cautionary Quotes from the Dissenting Opinions on Judicial Overreach

“[T]his Court is not a legislature.  Whether same-sex marriage is a good idea should be of no concern to us. . . . The majority’s decision is an act of will, not legal judgement.”

“It can be tempting for judges to confuse our own preferences with the requirements of the law.  But as this Court has been reminded throughout our history, the Constitution “is made for people of fundamentally differing views.””

“Marriage did not come about as a result of a political movement, discover, disease, war, religious doctrine, or any other moving force of word history—and certainly not as a result of a prehistoric decision to exclude gays and lesbians.  It arose in the nature of things to meet a vital need: ensuring that children are conceived by a mother and father committed to raising them in the stable conditions of a lifelong relationship.”

“As the majority notes, some aspect of marriage have changed over time. . . . [These changes] did not, however, work any transformation in the core structure of marriage as the union between a man and a woman.”

“The Court’s accumulation of power does not occur in a vacuum.  It comes at the expense of the people.  And they know it.”

“[T]he public debate over same-sex marriage must be allowed to continue.  But the Court ends this debate, in an opinion lacking even in a thin veneer of law.”

“This is a naked judicial claim to legislative—indeed super-legislative—power; a claim fundamentally at odds with our system of government.”

“With each decision of ours that takes from the People a question properly left to them—with each decision that is unabashedly based not on law, but on the “reasoned judgement” of a bare majority of this Court—we move one step closer to being reminded of our impotence.”

“The Court’s decision today is at odds not only with the Constitution, but with the principles upon which our Nation was built.”

“The founding-era idea of civil liberty as natural liberty constrained by human law necessarily involved only those freedoms that existed outside of government.”

“For millennia, marriage was inextricably linked to the one thing that only an opposite-sex couple can do: procreate. . . .  If this traditional understating of the purpose of marriage does not ring true to all our ears today, that is probably because the tie between marriage and procreation has frayed.  Today, for instance, more than 40% of all children in this country are born to unmarried women.  This development is undoubtedly both a cause and a result of changes in our society’s understanding of marriage.”

“Most Americans—understandably—will cheer or lament today’s decision because of their views on the issue of same-sex marriage.  But all Americans, whatever their thinking on that issue, should worry about what the majority’s claim of power portends.”