Take a Knee with Coach Kennedy

The name, Joe Kennedy, may already be familiar to you. He is an assistant high school football coach in Bremerton, Washington, who was recently suspended for leading silent, short on-field prayers after football games. Many of our government leaders are also aware and are standing up in a show of support.

Senator James Lankford, co-chair of the Congressional Prayer Caucus, passionately defended Coach Kennedy’s actions from the U.S. Senate floor, and lamented that the Bremerton School District has wrongfully attempted to create a “faith free zone.” According to Coach Kennedy, district officials shamefully suggested that he continue his seven-year tradition in a private place or consider, “hiding in the press box.”

We could just count this as another disappointing loss, feel powerless over the growing tide of anti-faith actions around the country and simply move on with our lives; or we can decide that it’s time to band together, focus on proactive solutions, and promote truth and honorable action. Remaining silent or on the sidelines only sends the message that the Christian community is unconcerned and about what’s taking place.

We are encouraged that Members of the Congressional Prayer Caucus have led a determined effort to garner support for Coach Kennedy. They have sent a strong letter, signed by 47 Members of Congress, to the Superintendent and the Principal of the school. Here is an excerpt from their excellent compilation of facts, case law and important talking points…

“Among the most basic rights that Americans enjoy are free exercise of religion, free speech, and the freedom of association. The Establishment Clause exists to ensure that the government cannot affirmatively impose or elevate one religion over another. However, it does not prohibit the government from referencing religion altogether, nor does it require that government officials proactively scrub all reference of religion from the public square. Rather, The Establishment Clause ensures both that the government does not show preference to a certain religion, and that the government does not take away an individual’s ability to exercise religion…. The Supreme Court has made clear that the voluntary observance of a brief prayer at the beginning of a legislative session – a tradition that is also embraced by both the United States Senate and House of Representatives – does not in and of itself present an Establishment Clause problem. Likewise, the mere act of a single individual kneeling along after the conclusion of a game to quietly pray coerces no one, even when that individual is a school employee. That others may choose to join him of their own free will is irrelevant, and an exercise of their own constitutional freedoms…We would urge you to consider the fact that Coach Kennedy’s personal actions are not only non-coercive, but also admirable and respectable as they represent his commitment to the welfare of the young men of his team.”

The truth is this coach has done absolutely nothing wrong. There was no public announcement, no official or sanctioned religious event, no coercion for others to pray, and contrary to the naysayers, this is not an issue pertaining to the separation of church and state. The First Amendment guarantees the right to freely exercise our faith in the public square. Senator Lankford went on to say, “The government does not have the authority to confine your faith to the location of the government’s choosing.”

This is not a time to merely play the role of spectators, but to pray and follow the lead of our national leaders.  We will always be stronger together! You can show your support for Coach Kennedy by copying the text from the post below and repost on your Facebook, or modify for other social networking venues.

(Copy and Paste the italiciz 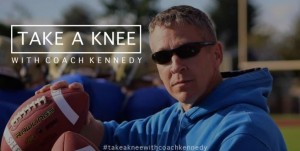 “The Constitution doesn’t require you to be sequestered to a private room out of sight & earshot to offer a prayer. Protecting Coach Kennedy’s freedom to choose to kneel quietly after the conclusion of a high school football game and pray, in a way which coerces no one, is something that all Americans should rally behind — regardless of religion or political persuasion. Because by protecting one citizen’s right to pray, is protecting every citizens right to pray. Standing up for one American’s freedom is standing up for every Americans freedom – whether they are of any faith or no faith at all.” Read more: http://ow.ly/U04P0 ‪#‎takeakneewithcoachkennedy‬

The truth is that people are faith are losing their jobs over deeply held convictions, the placement of war monuments are being challenged, the Ten Commandments, crosses and Christmas displays are being torn down, and the rights of conscience are being trampled upon by increasingly hostile elements within our culture. Most no longer have to be convinced of concerted efforts to redefine our Constitution, erase our Judeo-Christian heritage, ban prayer and silence people of faith. The evidence is now making the headlines on a regular basis.

The good news is that the Congressional Prayer Caucus, an official Caucus of the United States Congress, has 100 Members, and the Congressional Prayer Caucus Foundation has a network of thousands of praying legislators and citizens who are not willing to go quietly in the night. Pray for us, as we pray for you—to be strategic, organized, mobilized, and effective in reversing this trend.

With God, it’s never too late.

IN GOD WE STILL TRUST
Millions Display ‘In God We Trust’ Across America
Keeping First Things First by Congressman Randy Forbes
CORONAVIRUS, CARES ACT AND THE FIGHT FOR FAITH by Congressman Randy Forbes
President Trump Calls for National Day of Prayer
Trump Administration Takes Historic Steps to Protect Freedom of Religion
You Won’t Hear About This on the News
This is an easy win!
TODAY: Historic Advancement of Religious Freedom at the UN
Celebrating Constitution Day
Court Rules in Favor of Protecting Prayer
‘In God We Trust’ in every Louisiana public school
Freedom: Worth Celebrating… Worth Defending
Victory! Peace Cross Will Stand
Supreme Court Victory for IGWT
Doctors finally being protected
Free to Celebrate Our Faith